In this episode we examined why cryptococcal meningitis can lead to severe increases in intracranial pressure (ICP, defined as an opening pressure at lumbar puncture of 20 cm H2O), despite often being associated with such little inflammation in the cerebrospinal fluid (CSF). The association between cryptococcal infection and elevations in ICP is well established, especially in patients who are immunosuppressed, such as those with HIV. Indeed up to 70% of patients with HIV who develop cryptococcal meningitis developed elevated ICP.

It all starts with CSF

We began the episode by reviewing how cerebrospinal fluid is produced and drains back to the blood. CSF is produced in the choroid plexus, flows through the ventricular system, and drains into the subarachnoid space. It then gets reabsorbed into the blood through arachnoid granulations that are adjacent to venous sinuses.

The arachnoid granulations are composed of endothelial cells and actually form part of the blood brain barrier. CSF returns to the blood across this barrier by way of transport in large intracellular vacuoles and smaller vesicles. Think of cars being ferried across a river by boat.

Not your typical meningitis

ICP pressures are often elevated in bacterial meningitis. This results from inflammatory damage to the arachnoid granulations, impairing CSF transport back to the blood. But the CSF from cryptococcal meningitis is really not that inflammatory and sometimes comes out crystal clear. Not to mention, other fungi such as histoplasma, when presenting with fungal meningitis, do not cause elevated ICP to the same degree as cryptococcus.

Something unique to this organism must be going on.

This capsule is actually the antigen that’s detected with the cryptococcal antigen assay from bodily fluids. The capsule makes cryptococcus a very large fungus and also contributes to its virulence. 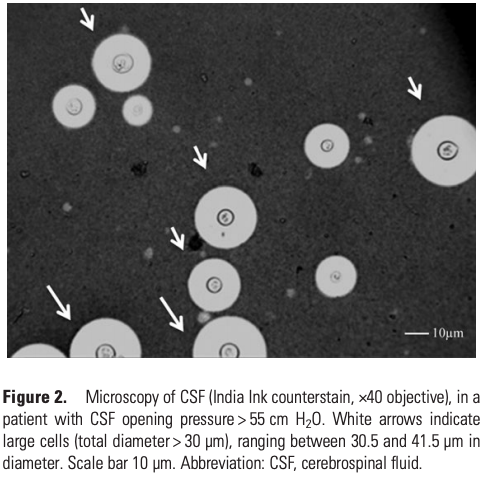 So is the size of cryptococcus, as a result of it’s capsule, the factor that blocks CSF flow or some quality of the capsule itself? Both may be relevant.

Different variants of cryptococcus can have different qualities of the polysaccharide capsule: mucoid vs smooth. A study in rats looked at the impact of smooth vs mucoid cryptococcal antigens on intracranial pressure. Mucoid antigen was associated with higher intracranial pressures,  and the authors theorized that the higher viscosity of the mucoid variants may have more effectively blocked CSF transport through the arachnoid granulations.

Regarding size, a fascinating study from the Journal of Infectious Diseases looked at correlation between capsule size and intracranial pressure, specifically in patients with HIV who had cryptococcal meningitis. They found that the patients who had the largest capsule size also had the highest intracranial pressures. It all comes back to the capsule.

Listen to the episode

Tony Breu, MD is an internist/hospitalist who loves asking ‘why’? View more posts